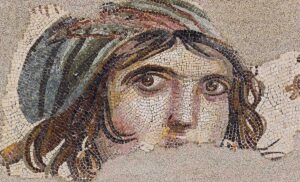 Zeugma was established for the first time in 300 B.C by Seleucid Nikator who was one of the commanders of Macedonian King Alexander the Great, alongside Euphrates River. The city which was given as a marriage portion after the marriage of Laodicea, daughter of Seleucid with Commagene King, became one of the four biggest cities of the Commagene Kingdom. After the region fell under Roman reign, Zeugma became more important when the 4th legion moved to the city.

Zeugma became an attraction centre as the largest city of Roman Period with its houses with Euphrates view, river trade and mobility in social life. Merchants, commanders and wealthy people who moved to Zeugma, built several villas with Euhrates view, master artists decorated the floors of such villas with stones that they revealed from Euphrates River with mosaics involving the mythologcial subjects of ancient period and adorned their walls with frescos. Zeugma Mosaic Museum contains mosaics from the site and is one of the largest mosaic museums in the world. Zeugma has been on the UNESCO World Heritage Site tentative list since 2012 In February 2020, it was reported that the Zeugma Mosaic Museum attracted a record 340.569 visitors in 2019.